The Famous Five Graduating Student Award has been endowed for perpetuity at UPEI.

To encourage and celebrate women in leadership positions, the Coalition, along with the Government of Prince Edward Island have endowed a scholarship at UPEI. 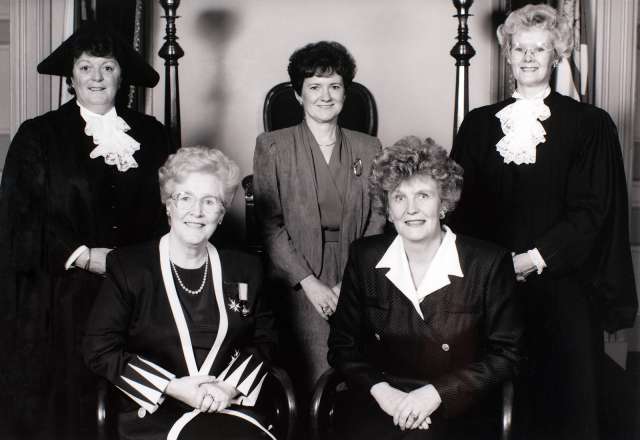 The PEI Coalition for Women in Government is delighted that today, the Prince Edward Island Minister Responsible for the Status of Women, the Honorable Natalie Jameson, announced endowment funding that will make permanent a Coalition-initiated annual award for a graduating student at UPEI.

The Coalition for Women in Government established the PEI's Famous Five Graduating Student Award at UPEI after the 25th anniversary in 2018 of the moment in 1993 when women took on five of the most influential positions in the province of Prince Edward Island. Premier Catherine Callbeck, Leader of the Opposition Pat Mella, Speaker of the House Nancy Guptill, Lieutenant Governor Marion Reid, and Deputy Speaker Elizabeth "Libbe" Hubley were elected or appointed to five of the most powerful positions in government. This was the first (and last) time in Canadian history that five women held these positions at the same time. The women became known as "PEI's Famous Five."

Says Coalition Board Chair Emma Drake, "The PEI Famous Five Graduating Student Award was established to honour the careers and service of these five remarkable women and is meant to encourage the next generation of women political leaders."

Drake continues, "The Coalition was pleased to establish this award with contributions from the organization and donations from the community. Today's support from the provincial government will ensure the award is available to graduating students in perpetuity and that the name of PEI's Famous Five will live on in the award."

Says Jane Ledwell, Board member of the Coalition, "The Coalition was particularly proud -- and surprised -- when we found out that this year's winner of the 2020 PEI’s Famous Five Graduating Student Award, Sweta Daboo, was the person we had just hired as our new Executive Director." Daboo had been selected for the award mere weeks before the hiring process for the Coalition.

"One of the ways I knew about the Coalition for Women in Government's work to increase gender parity and diversity in leadership was through applying for the PEI's Famous Five Graduating Student Award," says Sweta Daboo. "I could not have imagined when I filled in the application form that within a short time I would both win the award and be hired by the Coalition."

Says Daboo, "I look forward to fulfilling the promise of PEI's Famous Five to encourage leadership by people from groups that have been under-represented in decision-making."

"Sweta Daboo is exactly the kind of vibrant and ambitious young leader the graduating award is meant to support," says Ledwell, "and we couldn't be more pleased the provincial government's contribution will encourage a student leader like Sweta every year for the foreseeable future."